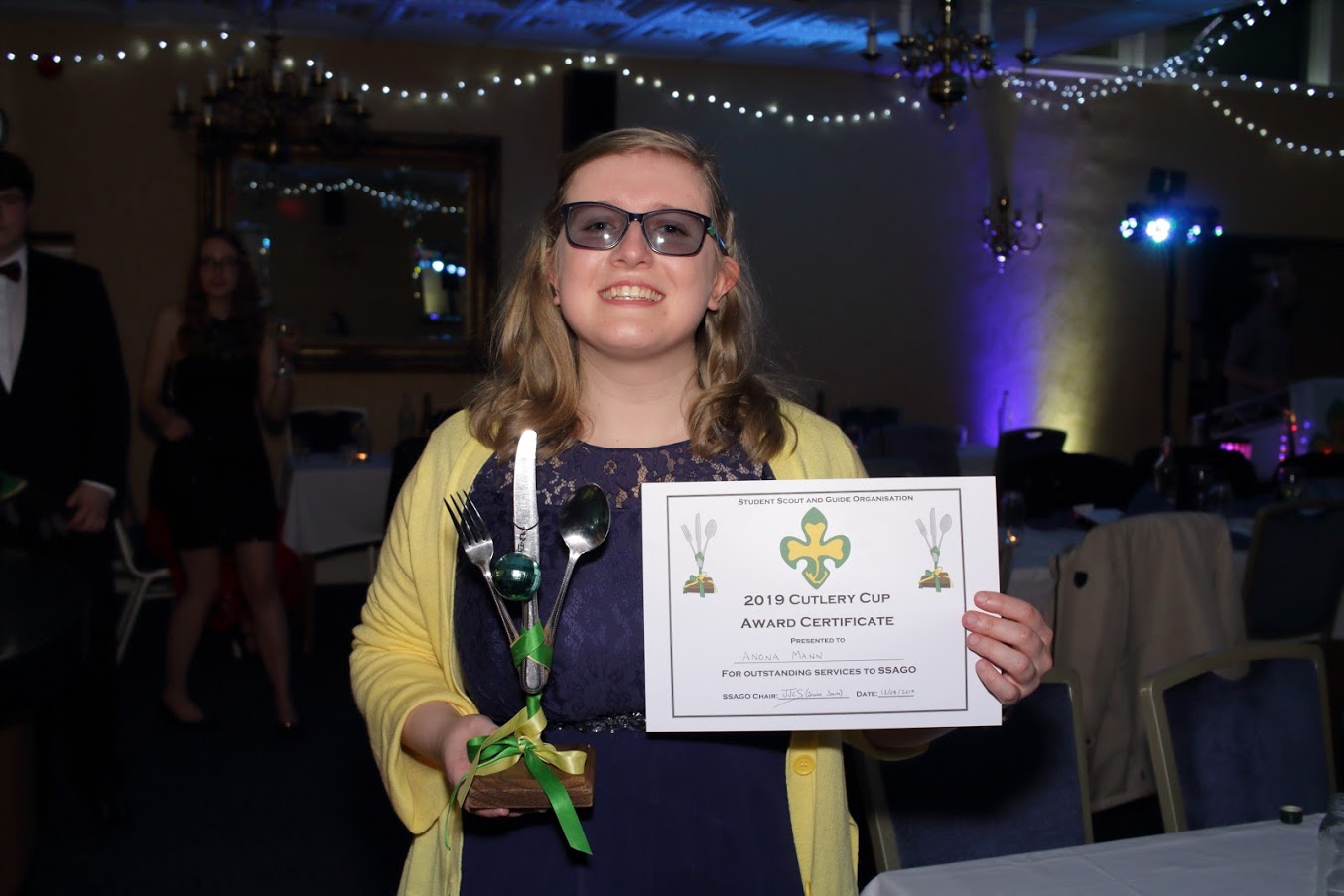 At Aber does ABBA Ball, Anona Mann from Sheffield Hallam Students Union Guides & Scouts (HUGS) was awarded the 2019 Cutlery Cup for the outstanding job she has done for HUGS, National SSAGO and local Scouting.

Anona’s shown immense dedication to Scouting and SSAGO during her time at University. She has been Hallam University Guides and Scouts Secretary and President, and has gone above and beyond in these roles. She strengthened links with Scouting, forged new links with Guiding, and worked closely with her Students’ Union, ensuring HUGS can continue to support the local community through volunteering. Anona has done extensive work for her club, from creating the HUGS flag, designing and making publicity materials and creating a Fact Sheet for other northern clubs to aid the running of Northern Freshers Camp.

Beyond SSAGO, Anona has volunteered at two sections within a local Scout group in Sheffield. She has become an fundamental figure within the group, and has stepped up to roles such as the Cub and Beaver Badge Secretary. Anona has also achieved top personal Scouting accolades such as her Explorer Belt and is working towards her Scouts of the World and Queen’s Scout Award, and has shown excellent leadership abilities by receiving her camp permit and completing her Wood Badge. This extraordinary amount of time spent volunteering has meant Anona has accumulated nearly 800 volunteering hours which are logged with her SU; and this doesn’t even include hours at Cubs or volunteering for SSAGO.

Anona was Activities Officer for Best of British HUGS Rally 2017 but took over many other roles in order to keep the event in check. Subsequently she did much more than just her activities role, doing anything and everything to ensure the event was a success.

Anona was Membership Officer on National Exec 2017/18, fulfilling her role by making all clubs, old or new, feel welcome. She helped new clubs attend regional and national events, and supported the growth of SSAGO regions where she encouraged them to hold more regional events. She was a vital member of the Exec, attending support events monthly, if not more.